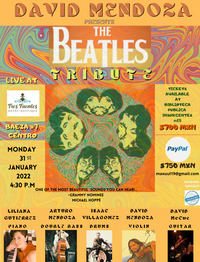 The incredible violin player and multi-instrumentalist David Mendoza is a San Miguel de Allende’s treasure, a musician that can impress you with just a few notes, just with his stage presence you can tell he knows what music really can do for an spectator, but more than that, he is a musician that can make you weep with his art.

David Mendoza played in several venues since 2015 from Mexico to Canada, David’s passion for music is clearly apparent as he plays. He is accomplished, very personable, and connects with individuals in a personalized way. Everyone present is moved by his music when he plays a live.

If one wants an enjoyable evening with family and friends, having David play will add an extra dimension to an special moment. David’s playing even made feel strong feelings to all kind of people, often individuals with disabilities have a unique way of appreciating the arts, perhaps sums David’s music up best in them saying… “His music fills the heart with love.” Or like Percy Bysshe Shelley says in his book To A Skylark…”profuse strains of unpremeditated art”

David also has been praised from many of the best musicians in town, like the Grammy nominee Michael Hoppé says…”Wonderfully expressive violin playing…it’s quite simple … one of the most beautiful sounds you can hear”

Beginning his career as a very young age, he had the need to learn and practice numerous instruments, as well as many genres, like Rock, Jazz, Classic music, New age and more. Being a composer as well as a multi-instrumentalist and a producer of his own music, this makes him a unique artist in the stage as well as in every recording he makes, he definitely is one of the best musicians in town, his musical domain that offers new music genres as well as traditional, played with complete passion and true energy, turns him in to an attraction you can not miss if you are in San Miguel.

For this next concert David will present a new project for his ensemble… The Beatles Tribute, one of the bands and genres that influenced David the most in his career, as a composer as well as a performer, this beside the great Mexican pianist Liliana Gutierrez, his talented brother Arturo Mendoza on the Double Bass, as well as the amazing Mexican drummer Isaac Villagómez. He and his musical guests have a gorgeous new venue in the beautiful SMA. Centro, at the beautiful jardín of Tres Fuentes Hotel on Baeza # 7, at the Back of the gorgeous Parque Benito Juárez. An intimate outdoor venue with comfortable seating for no more than 100 people. Tickets are available on Biblioteca Publica, Insurgentes #25, Centro, SMA as well as in the Lobby of Tres Fuentes Hotel.

Hal Moore is a Retired Healthc