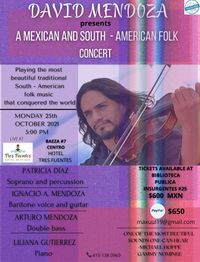 Several years ago, my cousin and I discovered David Mendoza playing his violin around San Miguel de Allende. He was Gil Gutierrez`s violin player, the Mexican guitar virtuoso in town. The sound was mesmerizing, magnetic, beguiling. His lyrical strains played on in my head and heart between encounters. There was something undefinable about him and his playing that wraps you with just the first piece you hear.

Varieties of music have always been an energizing passion, an irresistible motivator, an urgent catalyst in my life. So, I was thrilled to follow this young man and his fiddle as played in restaurants around town. Every time we saw him, he just got better and better.

I have been captivated and enchanted by music—and lucky in both my deliberate and random encounters—from shepherding five children through the University of Texas Junior String Project for twelve years to bouncing at rousing Police concert, from happening upon a remarkable Texas fiddler playing in the mountains of Germany, to coming upon a Classical choral group performing in a historic church outside Schwabish Hall, from Opera in Milan, Italy, to house concerts in our family homes. Yet it is David’s violin that moves me the most. His powerful energy elevates me to another frequency level.

Once my cousins Debra & Charlie and a colleague Joseph heard David at Paprika where he was joined by his talented mother. We sat at their table and felt so lucky, so thrilled and inspired by the program of the evening where he plays his original music as well as new age music from European composers, it was just one of the most memorable moments of my life. David’s playing does for me a range of what Bo Diddley and Offenbach do.

For this concert he is going to have very special guests, people who teach him his first musical steps, I am talking about his blood family. Beside his parents Patricia Díaz, Arturo Mendoza, at the voice and his brother Arturo Mendoza Jr. at the Double Bass ,as well as David´s pianist Liliana Gutierrez, they will play one of the favorite genres in the world for people - Mexican and south American folk music- who is the first kind of music David learned and made him the big musician he is today. Music from amazing famous interpreters Like “Mercedes Sosa”, “Violeta Parra” and “Silvio Rodriguez” that makes this music one of the most deep and enjoyable genres over the world. This will take place in the gorgeous garden of “Tres Fuentes Hotel Boutique” at Baeza # 7, right next to the beautiful and biggest park in San Miguel de Allende Centro “Jardin Juarez”. Tickets available at Biblioteca Publica Insurgentes # 25.

Come discover what David does for you!