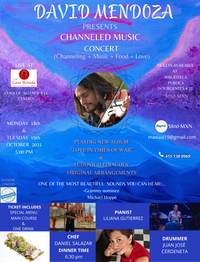 There are countless experiences, places and people that make San Miguel de Allende the unique and wonderful city that it is. Holding a place near the top of that long list must surely be the supremely talented young violin virtuoso, David Mendoza.

If music is the voice of the soul, then David is a messenger. Perhaps the one thing that sets him apart is the emotional connection he builds with the audience during his performances. His flawless technical skills draw you in, but it is his confidence, his energy, and the vibrant passion for his craft that holds you there. He gets lost in the music and invites you to join him.

Growing up in a family of musicians in Mexico City, David began playing violin when he was just 7 years old. At the age of 15 he earned a place at the prestigious National Conservatory of Music in Mexico City. Performed with some of the best musicians in San Miguel and collaborated with the Grammy nominated composer Michael Hoppè who has hailed David as “a wonderfully expressive violinist … it’s quite simply one of the most beautiful sounds one can hear”.

For this concert he will be playing his own musical language through his healing music, a kind of divine canalization where you’ll feel healed, as well as his own musical arrangements of the European music from the Italian composer Ludovico Einaudi who was trained at the Verdi Conservatory in Milan, all this beside the very talented Liliana Gutierrez Mexican pianist, and the amazing Mexican drummer Juan José Cerdeneta. David’s music is influenced by classic composers like Mozart and Beethoven, Impressionists like Debussy, and Ravel, as well as new classics like Ennio Morricone, Philip Glass and Steve Reich, without forgetting the amazing Australian/British World Music Band Dead Can Dance led by Lisa Gerrard and Brendan Perry as well as the alternative British Rock Band Radiohead.

If you have not had the pleasure and privilege of seeing David perform, now is your chance. He and his musical guests have a gorgeous new venue in the beautiful SMA Centro, at the beautiful patio in the important architectonic piece of San Miguel de Allende “Casa Rosada Hotel”. Not a big city concert hall, not a large capacity theater – but an intimate outdoor venue with comfortable seating for no more than 50 people.

Tickets are available on Biblioteca Publica, Insurgentes #25, Centro, SMA as well as in the Lobby of Hotel Casa Rosada. Ticket includes a special menu (main course and one drink) by the amazing chef Daniel Salazar. Dinner time at 6:30 pm Treat yourself and bring your friends. There may be no better way to spend an evening.

Sheila Sawyer is retired from a successful business career living in SMA.