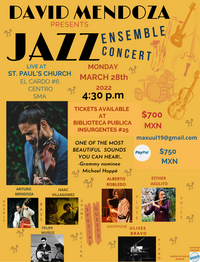 Concert David Mendoza presents “ Jazz Ensemble Concert” Monday 28th March 2022. ST PAULS CHURCH El Cardo # 6, Centro SMA 4:30 p.m. $700 pesos   by Kim Monroe   The amazing violinist David Mendoza is one of the great promises of Mexican performers in this country , he is by far the only musician in town that can play almost every genre with his group of musicians, he understands music so well, being a composer and multi-instrumentalist as well as director of his ensembles, he knows how to play as good as the original genre creators. He was born in a musicians family, hearing opera and classic music they inspired David to become a performer as well as a great Composer.   David has been praised by the Grammy nominee Michael Hoppé as… “Woderfully expressive violin playing, it’s quite simply…One of the most beautiful sounds you can hear”. David Mendoza got Michael Hoppe’s acceptance since 2017 when they started to make recordings together, David collaborated in “Amistad” Album(2018) and “Beneath Mexican Stars” (2021). Being Michael’s violinist at live performances since then.   David has collaborated with many of the best musicians in Mexico City as well as in San Migue, like Gil Gutierrez the amazing guitar player, Gabriel Hernandez the amazing Cuban jazz pianist, Aaron Cruz de great Bass Player from Mexico City and more.   For the next concert David Mendoza will perform one of his favorite projects, “Jazz Ensemble Concert” one of his most ambitious projects, playing the most interesting jazz from the american legend and Grammy winner “Pat Metheny” as well as compositions from Pat Metheny’s disciples like Mike Moreno and Gilad Hekselman, as well as music from the amazing composer Aaron Parks. This will close the show with a big ending playing for the second time one of the most impressive David’s own compositions; “Healing Dance” . An amazing piece that shows the entire soul of his music, dedicating it to his own story, being a Mexican with low opportunities in this country as an artist, being an abused child, as well as dedicating the tune to the pandemic situation. This beside Mexican talent like the amazing Guitar player Felipe Muñoz, the great drummer Isaac Villagómez, the exquisit pianist Ulises Bravo, the expressive Alberto Robledo on Saxophone, the wonderful Double Bass player Arturo Mendoza (David’s brother) as well as the talented Esther Asulito on the Flute and voice from Spain.   This will take place at the outdoor venue at the Jardín on St.Paul’s Church (Offering their beautiful church in case of raining) respecting a social distancing with Covid regulations. Tickets available at Biblioteca Pública Insurgentes #25 Centro, SM. David’s performances are very special, evocative, bringing so much joy to people, his music expresses emotions across the spectrum, a complete spiritual experience, transporting your soul in a magical journey through every note he express. If this is your first time with David’s music, you will return for more.   Kim Monroe is a world traveler and music aficionada living in SMA.

$750 pesos each ticket through PayPal