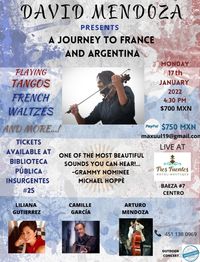 The phenomenal violín player David Mendoza arrived to San Miguel de Allende 6 Years ago as a street performer. He gave everything from his heart, the most wonderful sounds to the Principal Square in San Miguel de Allende. Powerful, bright tunes with love that caught the attention of all people walking around.

In these days of true sadness, to perform art is one of the many important things to do. Music has the power to transmute and transform blue feelings into pure positive thinking of joy and reconciliation. David has one of the most wonderful gifts to give people emotional joy, feel naturally involved and sing alongside with his personal artistic touch of interpretation of repertoires in every and each concert, he provides this good vibes feeling that all we need.

David become one of the favorite musicians for the community in San Miguel, he is not far to be one of the best interpreter musicians around over America. People always says about him..Oh, you’re going to love him – “David is on my ‘A’ list for San Miguel entertainment – I bring ALL my visitors.”

He used to play with the virtuoso from the guitar Gil Gutierrez, his intensity and sheer talent had the audience riveted since 2015 that he arrived here in San Miguel. Without music and from somewhere behind his closed eyes, his violin literally erupted. He stole the show and our hearts in one fell swoop.

David’s music transports the listener from chaotic angst through catharsis to a healing tenderness and occasionally even playfulness. As he matures as an artist/composer, his music only gets better. His listeners celebrate the unleashing of his creative genius in both writing and performing. To be part of David’s journey is nothing short of a privilege. Praised by the Grammy nominee Michael Hoppè as -David’s Wonderfully expressive violin playing is, quite simply, one of the most beautiful sounds one can hear-.

A big star of the Music is living now in San Miguel de Allende. For this concert he will share two of the genres he knows better to play, French and Argentinian music, playing some of the most famous Tangos, French Waltzes and more. All this beside the amazing French Accordionist Camille Garcia, the great Mexican pianist Liliana Gutiérrez as well as his talented brother Arturo Mendoza on the Double Bass. He and his musical guests have a gorgeous new venue in the beautiful SMA Centro, at the beautiful jardín of Tres Fuentes Hotel on Baeza # 7 at the Back of the gorgeous Parque Benito Juárez. An intimate outdoor venue with comfortable seating for no more than 100 people. Tickets are available on Biblioteca Publica, Insurgentes #25, Centro, SMA as well as in the Lobby of Hotel Tres Fuentes.