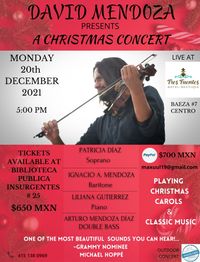 The violin phenomenon David Mendoza who is one of the favorite musicians of the San Miguel de Allende U.S and Canada Community since 2015, will sharing a special Christmas concert at Tres Fuentes Hotel Baeza # 7 Centro, Presenting a Traditional Christmas Carols and Classic music repertoire with the great Mexican pianist Liliana Gutierrez, his blood family Patricia Díaz Soprano, Baritone Arturo Mendoza as well as Arturo Mendoza Jr. at Double Bass.

David’s way of playing it’s quite simply a new and profound way of expression on México during the last 7 years. His versatility is a thing that no one in town can do, dominating a range between Hungarian violin style and New classics and Jazz performances are making David as one of the preferences of the SMA community, without forgetting his expressive melodic lines of sound that literally make his crowd cry of joy and love in each concert he presents, playing and loving music like his last minute of living. In San Miguel people are used to listen fascinated by surroundings, humming birds engaged in aerial combat feeding, deep blue sky punctuated by a passing flock of egrets, the ebbing of the sun on the trees and the sublime sound of David Mendoza and his talent through magical violin music that he shared every morning during his first years in SM infront of the Parroquia. Moments of serenity often pass by hectic lives, yet in the small courtyard was peace and wonder when he played, the gift of skill from a young virtuoso, blessed with the ability to transform a simple afternoon into an abiding memory. David’s diversity and expertise come from a childhood love of music and a family deeply rooted in traditional and classical music. Like words, music matters. It is our heartbeat, the sounds that define our lives and David’s music, both popular and of his own creation leave a deep sense of the universal sublime."
Beginning his career at the age of 6 years old as a natural expressive player, and grown up in a musician’s family, his sensibility became quickly as a pure melodic player. David´s unique musicality born in many ways, hearing and stimulating his ears and soul with huge Bach compositions at the age of 5 years old as his favorite music to enjoy, learning many years as self-taught piano classic music, taking violin lessons at a very short age, he understood his very own way to compose and to perform in big crowds in a very simple way of expression.

Praised by the Grammy nominee Michael Hoppè as -David’s Wonderfully expressive violin playing is, quite simply, one of the most beautiful sounds one can hear-. Everything mentioned makes this a Christmas concert you cannot miss. Concert tickets available Biblioteca Pública as well as Lobby Bar of Tres Fuentes Hotel.

Rondi Jones is a retired interior designer living in SMA.