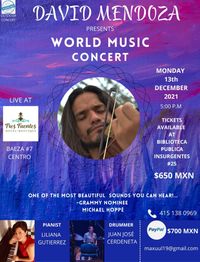 Without a doubt David Mendoza is a great promise of music, multi-instrumentalist and better known as an incredible violinist who lives in San Miguel de Allende. Beyond his understanding of music, David Mendoza understands the feelings. He knows how to reach them with a violin lunge, with notes placed in the places his heart asks. Listening to it is healing. Every note he plays tells you a story and they reveal a truth that is hidden from many, denied by others: that the beauty of the simple is what we need to heal this wounded world, eager for music and color. David is a musician with all his lyrics, thirsty to discover the secrets of music that makes him vibrate to transmit it to people; a musician who seeks to grow and touch the sky with the people he plays for, with his friends. David knows that music is a shared path. Or as Grammy nominee Michael Hoppe describes him, as “wonderfully expressive violinist, one of the most beautiful sounds you can hear”

For this concert he will be playing his own musical language through his healing original music, a kind of divine channeled meditation through his trasendental music where you’ll feel healed, as well as his own musical arrangements of the European music from the Italian composer Ludovico Einaudi who was trained at the Verdi Conservatory in Milan, all this beside the very talented Liliana Gutierrez Mexican pianist, and the amazing Mexican drummer Juan José Cerdeneta. David’s music is influenced by classic composers like Mozart and Beethoven, Impressionists like Debussy, and Ravel, as well as new classics like Ennio Morricone, Philip Glass and Steve Reich, without forgetting the amazing Australian/British World Music Band Dead Can Dance led by Lisa Gerrard and Brendan Perry as well as the alternative British Rock Band Radiohead.

If you have not had the pleasure and privilege of seeing David perform, now is your chance. He and his musical guests have a gorgeous new venue in the beautiful SMA Centro, at the beautiful jardín of Hotel Tres Fuentes on Baeza # 7 at the Back of the gorgeous Parque Benito Juárez. Not a big city concert hall– but an intimate outdoor venue with comfortable seating for no more than 100 people. Tickets are available on Biblioteca Publica, Insurgentes #25, Centro, SMA as well as in the Lobby of Hotel Tres Fuentes.

Treat yourself and bring your friends. There may be no better way to spend an evening.

Alberto Robledo Cervantes is one of te most talent Clarinet and Saxophone players in town.