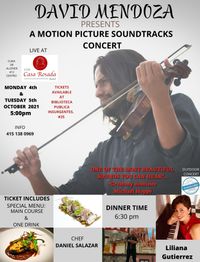 When I first encountered David Mendoza was about 4 years ago when I took my visiting friends to “Bistro Mi Casa” for the wonderful Gil Gutierrez band, where he was his violin player and we all 3 were like “WOW! who is that fantastic Violinist?!” We met his talent and I have been following David Mendoza ever since - at various places, I got surprised he is also an excellent percussionist, pianist and a wonderful composer; it is a complete journey to feel the colors and sensations that his music projects. I have heard him play a lot of his original compositions and I felt tears in my eyes every time I hear them live, it’s also a complete experience of love in every note he makes. I barely have words to describe how talented this man is, when he is performing the room fills up with so many emotions, like joy, happiness, love, and many more, sometimes indescribable; I’ve seen him sharing the stage with many talented musicians and it’s just magical how the music intensifies it’s feeling. Definitely he increases the sound of every band he plays in. I have bought his first album “Birds fly in” and I loved it! And his new album “Love in times of war” it’s just terrific!

No one else plays violin like him and definitely no one else in San Miguel de Allende plays the music he chooses for his concerts. His musical influences go from New Classics like Ludovico Einaudi, Hans Zimmer, Ennio Morricone to Rock like Led Zeppelin, Radiohead, Sigur-Ros and King Crimson, as well as Contemporary Jazz like Pat Metheny, Chick Corea, Ben Wendel, Tigran Hamasyan or minimal music like Steve Reich and Philip Glass and some gypsy violin players like Stephan Grappelli and Roby Lakatos. He thinks like an Absolut musician, thinking like a composer, director and performer at the same time. Or like the Grammy nominee Michael Hoppè says “Wonderfully expressive violin playing is…quite simply one of the most beautiful sounds one can hear”

For his next concert he will be sharing Motion picture soundtracks from classic movies like “Cinema Paradiso” by the Grammy winner Ennio Morricone, “Interstellar” from the Grammy winner Hans Zimmer as well as “Titanic” by Grammy winner James Horner. Beside the very talented “Liliana Gutierrez” Mexican pianist.

This will take place at the beautiful patio in the important architectonic piece of San Miguel de Allende “Casa Rosada Hotel” in Cuna de Allende # 12. Tickets are available on Biblioteca Publica, Insurgentes #25, Centro, SMA as well as in the Lobby Hotel Casa Rosada. Ticket includes a special menu (main course and one drink) by the amazing chef “Daniel Salazar”. Dinner time at 6:30 pm